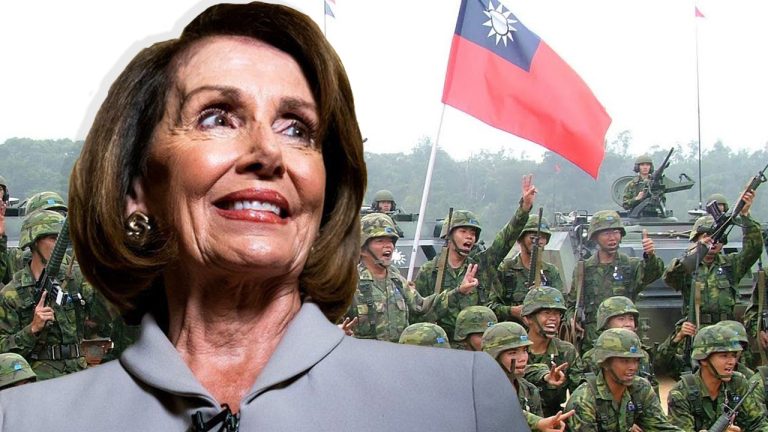 While the global economy remains gloomy and the war in Ukraine continues, there’s been significant tension between China and Taiwan. The American representative from California, Nancy Pelosi, plans to visit Taiwan this week and White House officials say China is preparing to carry out “military provocations.” Moreover, during the last few weeks, reports note that the global economy could crater if there’s a Chinese military attack on Taiwan.

Sources have explained to Reuters that California representative Nancy Pelosi is expected to be visiting Taiwan on August 2, 2022. CNN also confirmed that Pelosi was going to visit Taiwan, even though there’s a risk of provoking China. While the country is governed independently of mainland China, Beijing has always considered Taiwan part of the Chinese territory. Taiwanese president Tsai Ing-wen and the Democratic Progressive Party, however, favor Taiwan’s independent government that’s been operating independently since 1949.

In more recent times, tensions have grown sour between China and the island separated from continental Asia by the Taiwan Strait. China’s Xi Jinping classifies Taiwan the same way China classifies Hong Kong, with the “one country, two systems” formula. Tsai Ing-wen, the Democratic Progressive Party, and Kuomintang (KMT) reject the People’s Republic of China’s (PRC) concept often called the ‘One China’ rule. According to a Financial Times (FT) report, Pelosi is expected to discuss matters with the Taiwanese president on Wednesday.

Pelosi’s visit has stirred a lot of discussions concerning China using its military to show force in the Taiwan Strait. An ABC report notes that the White House has warned of China carrying out “military provocations” against Taiwan during the visit. The strategic coordinator for the U.S. National Security Council, John Kirby, told the press “[America], and countries around the world, believe escalation serves no one.”

“China appears to be positioning itself to potentially take further steps in the coming days and perhaps over longer time horizons,” Kirby said. Furthermore, Kirby added that “Beijing’s actions could have unintended consequences that only serve to increase tensions.”

While a recession is bad enough, the world is already dealing with the military conflict taking place in Ukraine against Russia. Adding a conflict between China and Taiwan could make matters much worse. A top trade negotiator from Taiwan’s capital of Taipei told Reuters that global trade flow issues would be greater than the issues stemming from the Ukraine-Russia war. The Taipei trader said that one of the biggest problems that could occur would be semiconductor shortages.

At the end of June, Bloomberg published a report that further verified the Taipei trader’s statements as the article said a China-Taiwan war could spark “economic chaos.” The report insists that China attacking Taiwan could “go well past semiconductors.” “A major war over Taiwan could create global economic chaos that would make the mess produced by Russia’s war in Ukraine look minor by comparison,” Bloomberg’s Hal Brands details.

Last week, the New York Times’ (NYT) Dealbook editorial highlighted that “an escalation from Beijing would have far-reaching economic consequences.” Much like the financial calamity that arose during the beginning of the Covid-19 pandemic and the market volatility that started during the Ukraine-Russia conflict, escalated tensions between China and Taiwan could cause global financial markets to tailspin from a recession to a depression.

Similar to the Ukraine-Russia war, the U.S. and other countries could get involved by enacting financial sanctions against China and funding Taiwan’s military. NYT’s Dealbook explains that one of the biggest fears is that “Beijing will cut off access to all or part of the Taiwan Strait, through which U.S. naval ships regularly pass.”

The issues between China and Taiwan have also sparked speculation that these battles could start World War III. During the first week of July, the trends forecaster Gerald Celente spoke with Bitcoin.com News during an interview and he stressed that “World War III has already begun.” At the time, Celente discussed the conflict in Ukraine and the tensions between China and Taiwan.

The trends forecaster and publisher of the Trends Journal has been tweeting about China and Taiwan during the last 24 hours. In response, Celente published a blog post that explains the “U.S., once again, sends mixed message on foreign policy” in regard to Pelosi’s visit with Tsai Ing-wen.