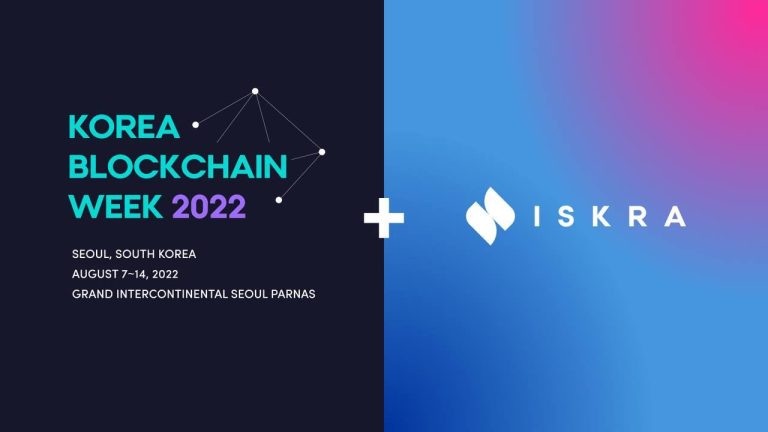 PRESS RELEASE. SEOUL – Iskra took the stage at Korea Blockchain Week, outlining their vision of game publishing in the era of Web3. “The technology is now available for us to provide an ecosystem that enables better outcomes for everyone: players, game developers and the platform itself. There is now an opportunity for every stakeholder (especially players) to share in the overall value created by the game experience: from digital asset ownership, fandom development, to overall community participation.”, explains Ben Colayco, Iskra’s Global Managing Director.

Iskra plans on distributing up to 100% of all platform fees to every stakeholder, based on their participation. Participation is determined through Iskra’s Community Ranking System that measures everything from running an Iskra network node (Pioneer NFT), staking Iskra’s native token (ISK), to simply using platform services. This form of Game Publishing for Web3 includes the players as stakeholders from the very beginning, creating a dynamic where they are no longer the main source of revenue and are now sharing in the overall value created by the game experience. This alignment hopes to create a virtuous flywheel where a highly engaged base attracts the best content, and the best content continues to grow the highly engaged base, while all sharing in value creation.

The Iskra game partnership strategy revolves around game development experience and content-specific potential for web3. Following this criteria, Iskra has signed one new studio to its game line up: HDLABS, HDLABS has experience in the blockchain game space with “Stepwatch”, it’s Move to Earn (M2E) title, and is working on transitioning up to 30 titles from Web2 into Web3. HDLABS and Iskra will be launching a turn-based RPG “Three Kingdoms Multiverse” together in Q4 of 2022.

This brings the Iskra full game line up to four confirmed titles and highly experienced studios, which include Grampus with its popular restaurant simulation game “Cooking Adventure”, Rich Alien’s 3-match puzzle “Cascade Kings”, and Iskra’s own in-house title “Klaymon”, a collectible RPG. More announcements for new games and partners are anticipated by the end of 2022.

Mr. Seok-ju LEE, CEO of HDLABS believes that “The combination of our game expertise, Iskra’s blockchain knowledge and engaged community will deliver the next generation of enjoyable and sustainable game experiences for web3.”

Mr. Ji-in KIM, CEO of GRAMPUS added “We agree with the Iskra philosophy of Play AND Earn, not just Play TO Earn to foster genuine enjoyment and sustainability.”

ISKRA is the Future of Play. The company is backed by some of the biggest technology and game companies from Korea. ISKRA ‘s community-forward system aligns the interests of the community by rewarding its stakeholders based on their participation while integrating sustainable tokenomic solutions for game developers that join its platform. The Company seeks to bridge the gap in web3 adoption between early adopters and the mainstream by combining enjoyment, sustainability and the latest in blockchain technology.

Hosted by FactBlock and co-hosted by Hashed, Korea Blockchain Week, 2022 is a premier crypto and blockchain event bringing together the brightest minds of the industry to discuss, redefine, and celebrate the future of finance and web3.

HDLABS is a company that is planning to be the perfect center of balance in the rapidly growing and changing metaverse industry. Sharing a vision with various global companies, we hope that developers, investors, and users can all move forward together into a fair and valuable future of blockchain. HDLABS is building and expanding the blockchain system for game development and games by providing innovative blockchain service solutions with creative know-how and experience from various expertise. In addition, HDLABS focuses on continuous research and development of new technologies such as BLOCKCHAIN, NFT, and GAMEFI so that a healthy and infinite ecosystem that can circulate in any variable system. They are trying to make what people have not yet seen before.

GRAMPUS CWC is a subsidiary that develops the blockchain games business of GRAMPUS. GRAMPUS is a video game developer and publisher of casual simulation and metaverse platforms. The company has developed several games for various platforms, such Bingo Adventure, My Little Chef, and Cooking Adventure. GRAMPUS CWC empowers people to own, gain, and trade digital assets through blockchain games, decentralized finance, and intuitive distribution platforms. The ultimate goal is to create a fair and safe digital media ecosystem anyone can enjoy based on casual games.

Rich Alien, “Party In, Rich Out” Rich Alien, a subsidiary of the company 111% behind the global hit game “Random Dice Defense,” produces AAA quality 2D based mid-core games. Rich Alien aims to optimize game design and game metrics after the prelaunch of the standalone mobile app. It’s our belief that we should add the “to-earn” components to the mobile game only when we believe we nailed down the game balance and are confident about in-game metrics. The Company has already received an outpouring of support from top gaming companies and gaming professionals from Korea. The first title from Rich Alien is Cascade Kings: it’s a Match-3 puzzle gameplay with base building, saga progression and epic PvP gameplay that involves attacking your friends, stealing coins from others and collecting ultra-rare character cards.